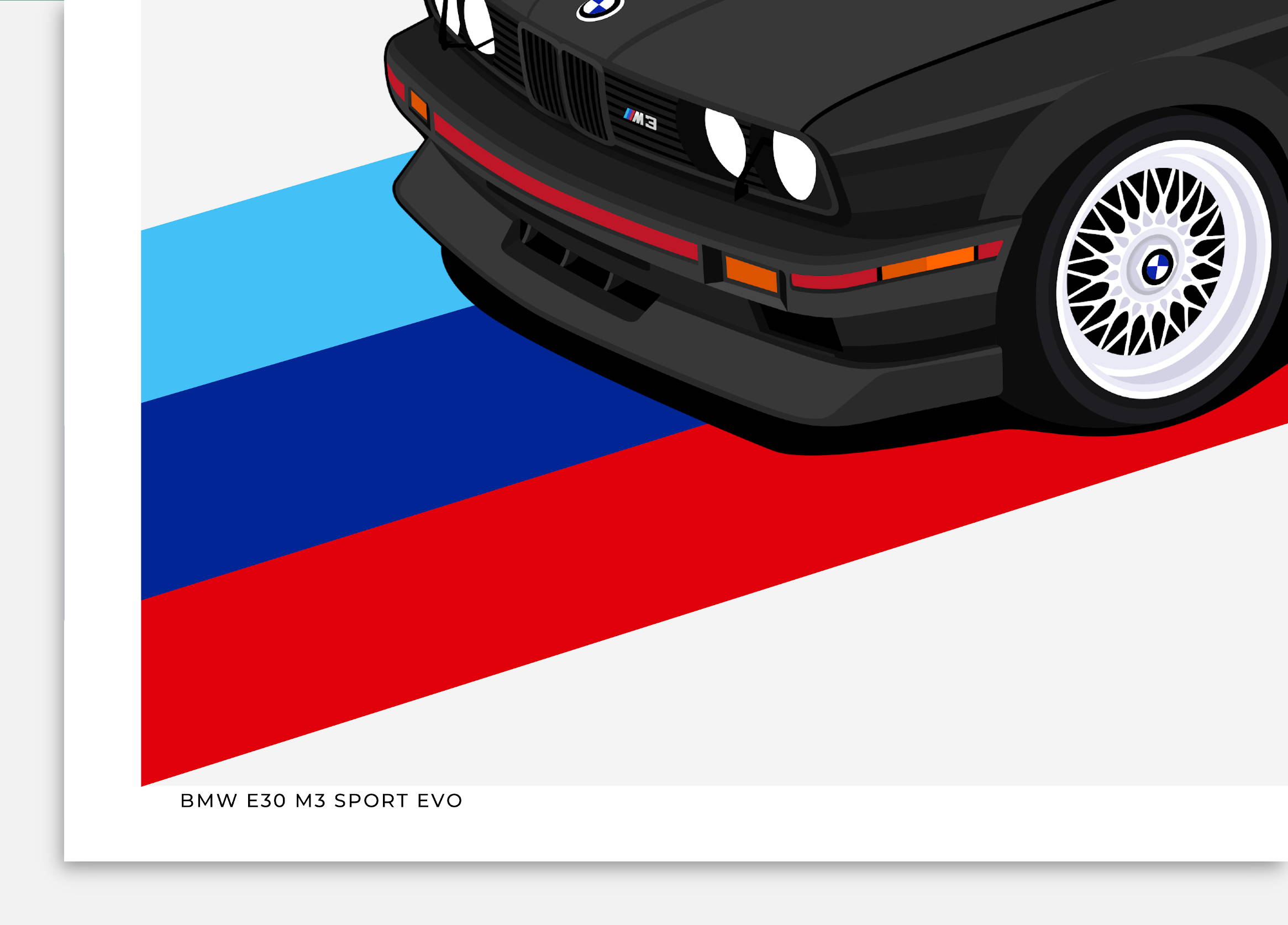 ABOUT THIS LEGENDARY CAR 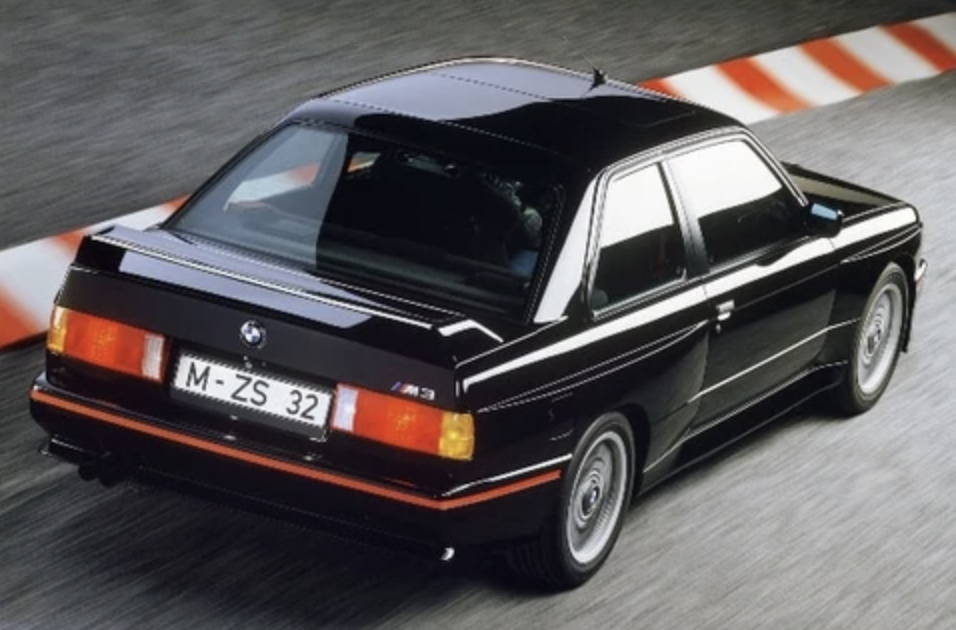 Just look at those arches. Built to fend off competition from its nearest competitor, Mercedes, in "Group A" German Touring Car racing, the M3 was originally introduced in 1986 as a homologation to facilitate its racing counterpart, the M3 DTM. Later, this limited edition "Sport Evolution" model, equipped with a 2.5-litre engine and adjustable front splitter and rear wing, was as close as you could get to driving the Group A race machine.

Off the track, the E30 Evo III soon became many young petrolheads' go-to poster car throughout the early nineties. Nowadays, the car has amassed an almost biblical reputation. Rightly so, the car is for the purists, a trait which is sadly becoming ever more rare in the modern era of electrification and regulation.

HOW MUCH IS SHIPPING AND HANDLING?

Shipping for our paper prints (no frame) to the EU & UK is free.

Shipping for paper prints outside of the above regions will be calculated at checkout.

Shipping for our framed prints is free to selected destinations, such as mainland UK. Continue to checkout to see an accurate shipping cost for your country. 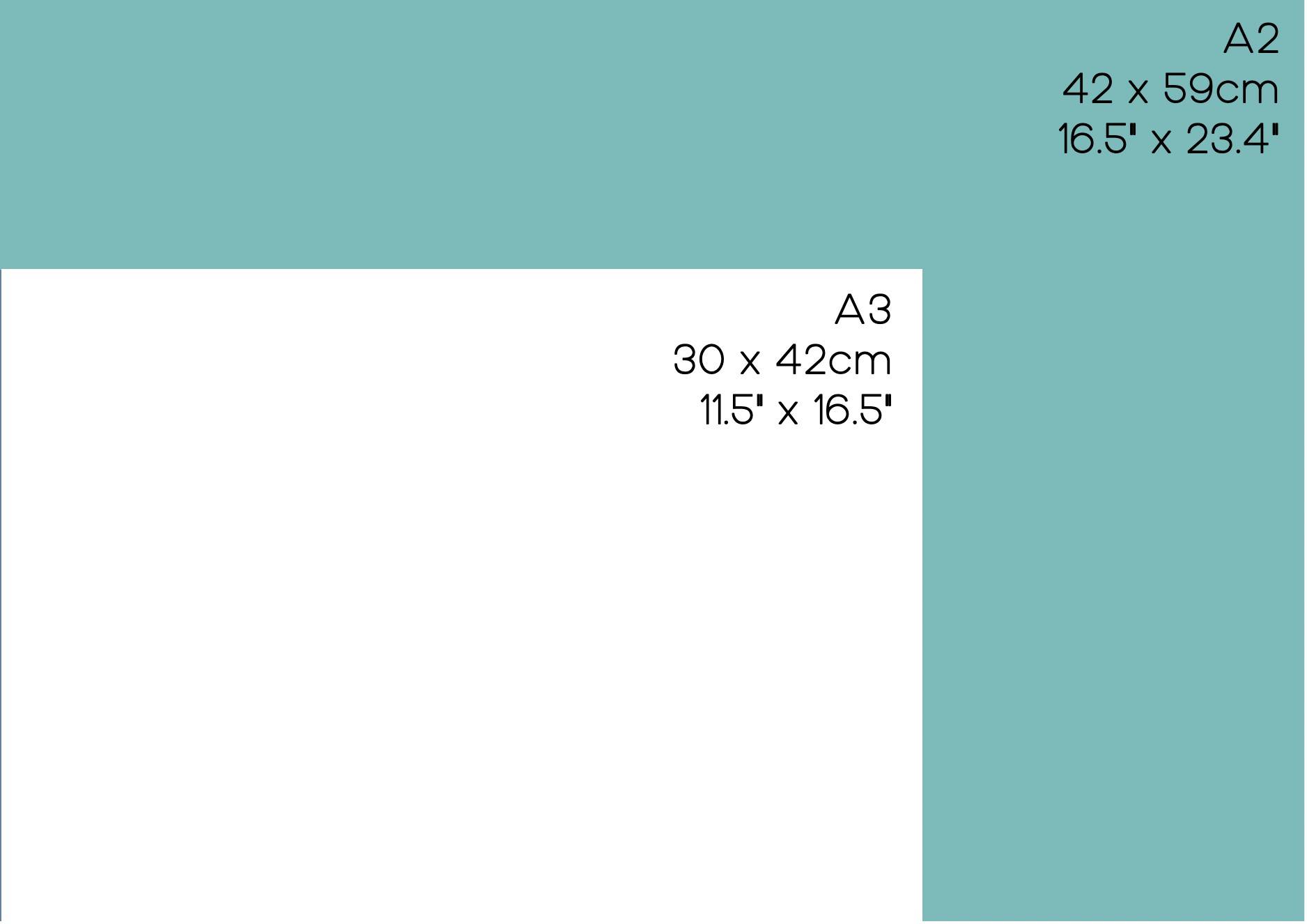 CAN I FIND MY OWN FRAME FOR THESE SIZES?

Of course! Both our A2 and A3 print sizes are industry standard sizes so you'll have no trouble finding frames in any style you like.

But if you prefer to forget the hassle and would rather get your print ready-to-hang right out of the box, opt for our high-quality frame option above, available in both sizes. Our frames are strong, modern and use museum-grade perspex.

WHEN WILL I RECEIVE MY PRINT?

That depends where you live. We aim to dispatch all orders within 1-2 working days, and orders are delivered on average 5-7 days after ordering, sometimes less. This may vary depending on the season.

HOW DO I HANG MY PRINT OR FRAME?

However you wish! Our paper posters can be stuck to the wall using sticky tack, standard poster tape, pin tacks and so on. Or you can have your print framed or mounted onto your desired surface however you desire.

Our small 6x8 print is the perfect size for a framed desktop decoration.

Our framed prints come ready to hang right out of the box, so you don't have to worry about finding special attachments or anything crazy. Just some standard wall hooks or nail in the wall will do the trick.

Alternatively, you can prop your framed print up against a surface or on a shelf for a stylish and modern decor style.

Of course! If you're not satisfied with your print in any way, simply let us know via email within the first 30 days of receiving it. We'll let you know how to return your print and we'll issue you a full refund if it is returned in the condition it was sent.

CAN I HAVE A CUSTOM PRINT MADE?

We'd love to make you a fully custom print! You can use your car, or any car you wish — be it your childhood poster car or inspiration goal car.

Head over to our Custom Print order page and follow the instructions.

LOOKING FOR SOMETHING SIMILAR?

I’d looked everywhere for high quality, tasteful and appealing car art and ended up ordering this M3 in A2, framed.

The quality is faultless of both the print, and the frame. It’s refreshing to see a properly framed picture with hanging string and a sealed back, as most frames these days are awfully cheap quality.

It looks incredible hanging on the wall, I’d rate it 10/10 and an absolute must for any BMW fan.

I was so impressed I’ve ordered another framed print which speaks volumes about the quality and satisfaction.

Thank you so much for the kind words Tom, really glad you both love your framed prints! Michael

Lives up to the name

I’ve been following Michaels work for a while now and I’m still blown away from how clean and polished the art is in person. The drawings look good online but holding it in your hands is incredible. High quality paper, the print looks better then it did online and not a bump or scratch in shipping. I’d recommend to anyone that has a love for WRC or Group B definitely worth every penny.

Beautiful poster with amazing detail and excellent quality! This is our second poster and we look forward to ordering more! My son is a car enthusiast and my next order will be a custom print. Michael is professional and wonderful to work with. I reached out to him and I was impressed by his quick responses in email. Would highly recommend!!

I’d looked everywhere for high quality, tasteful and appealing car art and ended up ordering this M3 in A2, framed.

The quality is faultless of both the print, and the frame. It’s refreshing to see a properly framed picture with hanging string and a sealed back, as most frames these days are awfully cheap quality.

It looks incredible hanging on the wall, I’d rate it 10/10 and an absolute must for any BMW fan.

I was so impressed I’ve ordered another framed print which speaks volumes about the quality and satisfaction.

A custom print is a wonderful gift for the car lover, or even casual enthusiast in your life. My print came out britlliantly detailed, instantly recognisable and put a huge smile on my mums face. (It was her gift :) ) Seriously, it looks fantastic.

exactly what i ordered and looks amazing, much better than i thought

This print is my second order, and wow there is not one negative thing to say. Yet again the poster blew my expectations away. The artwork is absolutely amazing, the colours are vibrant, and the quality is excellent as it was with my first order. I can wholeheartedly recommend RememberTheDrive, amazing prints and the best customer service I've experienced! I will definitely buy another print, as I find myself find a big smile when I open packages from RememberTheDrive.

As always, customer service is outstanding. Professional and helpful correspondence, it’s clear that RememberTheDrive really does care. The print is fantastic too, with incredible detail and high quality materials, it looks stunning. The frame is also very nice and easy to hang. Highly recommend!

Bought it in addition to my personal print. Both have a really good quality and I just love the style of Michael. Really nice contact, I'm definetely buying again.

If you want your personal print of your car created as a fantastic piece of art then you are at the right place. Right at the beginning you will notice that Michael is really interested in making your own print exactly how you want it. He answered quickly, the correspondance was outstandingly kind and effective. He makes several drafts until you get the perfect result you are 100% happy with.

I bought the Subaru and Mitsubishi, and they are both amazing quality. The whole process was very transparent and I was constantly updated with new information. Everything went very smoothly! Both of my posters are hanging up in my Rally Room right over my sim wheel. I also just ordered the new Quattro and that one will join them up there soon!

I'm absolutely in love with this print! Amazing design, beautiful colours, excellent quality. This is my first purchase and I'm absolutely blown away. What you see on the site is exactly what you receive as well. I had no issues with my order, the entire process was very smooth. I can definitely recommend these prints to anyone that has empty spaces on their wall and loves cars. Keep up the awesome work!

Ordered the custom print for my Mclaren 675lt to match and I couldn't be more impressed with the outcome and service I received from Michael. Michael was super fast to respond, professional but also provided a personal service. He accommodated to all my needs and was happy to adjust changes, until the final draft was perfect! Couldn't recommend Remember The Drive enough - if you're contemplating getting a custom print - go for it! Thanks Michael once again.

James
Get a Custom Poster
03/19/2021
Professional and personal

I’m really pleased with my custom Porsche print - Michael was professional yet personal as he dealt with my many tweaks! He even added a few wallpaper options so I could use the image as my phone and tablet background

The print is beautiful. Detailed, colourful and printed on high quality material it’s more than worth the asking price. The optional frame is sleek and easy to hang. 5/5 would recommend!